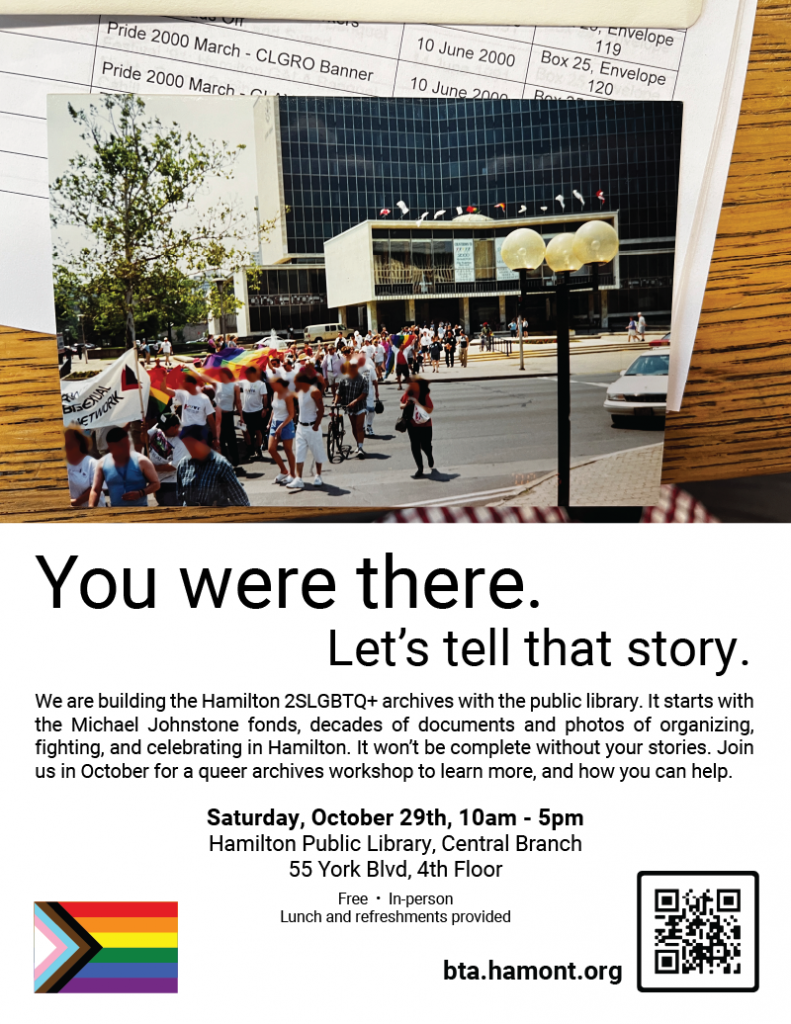 Choose Your Small Groups for Discussion

Each group will run twice so attendees can choose two to participate in.

Jane Aronson is Professor Emeritus with the School of Social Work at McMaster University, where she also chaired the President’s Advisory Committee on Building an Inclusive Community for many years, and worked on many feminist and LGBTQ+ groups and issues. Her research interests center on the giving and receiving of health care and public services, focused on the needs of women and older adults, long-term care policies and practices, and their implications for women’s work and well-being as givers and receivers of care.

Jill Davies (aka Monro) came out in 1975 in Hamilton and spent 8 years working at the Royal Connaught Hotel. During this time, Jill (Monro) was doing drag shows working at places like the Jockey Club, Billie Roses, Club Scandals just to name a few. Jill transitioned in 1983 and faced challenges that came with the transition during that time period. In order to feel more accepted by her local community she volunteered for various positions, serving on the first Police Task Force as a direct result of project Rosebud. In addition, Jill attended the first AIDS walk in full drag and was able to raise good funds using this gimmick. As time went on, Jill served on the Pride Committee for 3 years and volunteered with the fundraising group The Imperial Court of Hamilton Wentworth. Jill was in attendance at our first Pride flag raising and proclamation by Mayor Morrow. Years later she was honored by being asked to raise the first ever trans flag at city hall. Currently Jill works at the Well as a house drag Queen.

Amber Dean is a professor in the Department of English and Cultural Studies at McMaster. Over the years she’s been involved in several Hamilton queer / sex positive groups, including the Well (Hamilton’s former LGBTQ+ wellness centre) and Big Susie’s sex worker advocacy group. She teaches a class on queer archives at McMaster and students in the course are contributing to building the Hamilton 2SLGBTQ+ Community Archives.

Richard Douglass-Chin is an associate professor of English/Women’s and Gender Studies at the University of Windsor. He is a founding member of Racialized Academics and Advocates Centering Equity and Solidarity, and has appeared on CBC and CTV to speak about anti-racism and new ways of thinking about white supremacy. He has facilitated Walls to Bridges classes comprised of both incarcerated and non-incarcerated students within prison spaces. He is currently co-creating an online Anti-Racism Bystander Intervention course to be launched in 2022. He is also curating a new historical kiosk for Griffin House that will help highlight the rich Black history of Hamilton. He is a trans man of African, Caribbean, Chinese, South Asian and Scottish descent who has lived in Hamilton since 1966 and who transitioned in 1998.

Cole Gately (he/they) came out of the closet in 1991, the first year of Hamilton Pride. Since then he has been active in organizing within Hamilton’s 2SLGBTQ+ communities. He spent the 1990s managing the Women’s Bookstop, Hamilton’s feminist bookstore, and moved into social services by providing outreach to men who have sex with men through Hamilton AIDS Network, as it was known then. In 2000 he started his career in street outreach, connecting people experiencing homelessness to housing, health care and social services. In 2008, while he was working on completing an MA in Adult Education, Cole, who was assigned female at birth, transitioned and lives full-time as a genderqueer man. He focuses much of his energy providing education to adults about trans inclusion and positive space. He has the privilege and responsibility of being one of two community stewards of the Michael Johnstone Collection, which was donated to HPL in 2018.

Emily Groom (she/her) has been part of LGBTQ+ advocacy and organizing in Hamilton for more than fifteen years. She is a founding member of the Women and Liminal Committee, a past board member of Hamilton Pride Festival Inc., a board member and group facilitator for Hamilton’s LGBTQ Community Wellness Centre (“The Well”), and the owner and operator of the Steel Lounge, one of Hamilton’s lost queer-owned, queer-centring bar and event spaces. She acknowledges the power of the organized labour movement in securing rights for all workers and its role as a vanguard for diversity, equity, and inclusion in our working environments, and is a student of the entwined history of organized labour and 2SLGBTQAI+ community care and activism. Emily is a transit operator for the city of Hamilton, is active in her union, and is co-chair of ATU Canada’s Equity & Inclusion Committee. She lives in Hamilton with her wife, their two daughters, and two excitable dogs named George and Eloise.

Myron Groover is McMaster University’s Archives and Rare Books Librarian. He read History at the University of Aberdeen and Library-Archival Studies at the University of British Columbia. His work focuses on collection development, curation, and teaching with archives and rare books. His academic interests include book history, the material culture of text, and the history of ideas.

Ian Jarvis has a long history of Queer activism and working in the arts. In the past he’s been part of many organizations including Queer Nation Toronto, AIDS Action Now, Inside Out Film Festival, Buddies in Bad Times Theatre, Trinity Square Video, Factory Media Arts Centre, Stop the Cops, The Well, The AIDS Network, The Polari Project, Big Susie’s, HAND (Hamiltonians Against Neighbourhood Displacement), Hamilton Artists Inc. and Centre3 for Print and Media Arts to name a few. His artwork has primarily been focussed on issues dealing with Queer sexuality, HIV and Gay Men’s health issues for which he has received numerous grants and awards. His past film and video work has appeared around the world including: The Directors Guild of America, The New York Film Festival, The British Film Institute and the Boston Institute for Contemporary Art.

Karen Milligan is the Manager, Local History & Archives at the Hamilton Public Library. She holds a Masters of Library and Information Studies degree from Dalhousie University in Halifax, NS where she was born and raised. Karen is also a graduate of the Archives Society of Alberta’s Archives Institute as well as the Public Library Leaders Fellowship Program (PLLF) from the iSchool Institute at the University of Toronto.

As a long-time resident of Hamilton, Vilma Rossi has been involved in community-based feminist organizing against gender-based sexual violence. She was a former staff member with the Equity and Inclusion Office, McMaster University, where she designed and co-facilitated a variety of human-rights related workshops. She is currently volunteering with the Hamilton YMCA facilitating English Conversation Circles for Newcomers as well as pursuing independent studies in the Italian language.

Rebecka Taves Sheffield is an information professional, archivist and recovering academic based in Hamilton, Ontario. She researches and advises on queer history, digital policy, recordkeeping and archives. Rebecka is the author of Documenting Rebellions: A Study of Four Lesbian and Gay Archives in Queer Times (Litwin, 2020) and was part of the award-winning editorial team that produced Any Other Way: How Toronto got Queer (Coach House, 2017).

Joe Whelan is a lifelong resident of Hamilton who currently works from home managing his ‘Joe The Tax Guy’ tax preparation and accounting business for over 600 clients. Joe’s Queer activism in Hamilton spans many decades and began in the late eighties when he went public with his legal fight against his spouse’s employer for same-sex spousal benefits. Joe has worked in the past as a Community Outreach Worker on the ‘The Van’ Needle Exchange Program for Public Health and as the Men’s Health Outreach Co-ordinator for The AIDS Network. Joe’s previous involvement with Hamilton’s 2SLGBTQ+ community also includes volunteer positions as board treasurer for Hamilton Community Legal Clinic and a member of Hamilton’s LGBTQ Advisory Committee. He also sat as a member of Hamilton’s GLBT Police Task Force. Joe is most proud of his achievements as chairperson of Hamilton Pride Festival Inc. in 2007 and 2008. His work with a very dedicated team resulted in two of Hamilton’s most successful Pride festivals.

We’ve set a table aside for posters, flyers, business cards, buttons, flags, and anything else you’d like to share that is of interest to Hamilton’s 2S and LGBTQ+ communities and your fellow attendees.